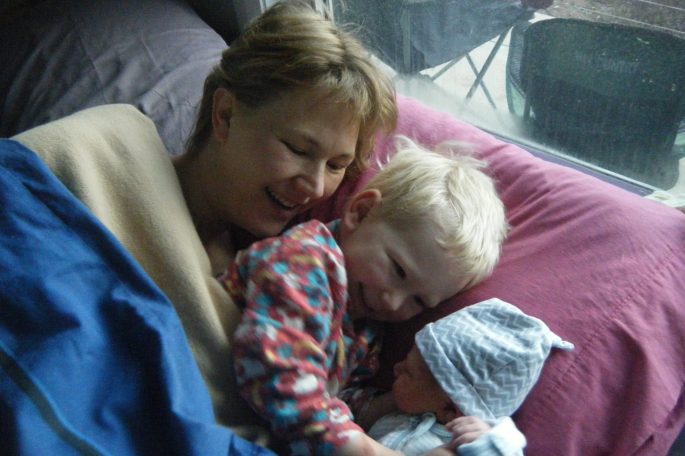 Way back in 2006, Ricki Lake and Abby Epstein made the documentary “The Business of Being Born,” which details how the US medical model of birth is designed to serve insurance companies, not women or babies.

The film offers the idea that birth in the USA could be different, with more psychological support and continuity of care – factors that have been proven to provide better birth outcomes and lower rates of intervention.

But for ten years, and still, I keep hearing versions of the same story the filmmakers’ outline: “my husband and I were content with the “failure to progress”-Pitocin-epidural-cesarean labor and birth we had. We handed ourselves over to the medical hospital model, saying “I don’t know anything about this, and you guys [hospital staff] do.”

In the end, the surgeon who pulled their healthy baby out was nice, and the woman’s recovery was speedy.

And the best they can say about their child’s birth was: “it all worked out OK.”

Meanwhile, at my local supermarket, cashiers have started asking everyone “did you find everything you needed?” at check out.

It’s a level of customer service I find grating at times [If I hadn’t found everything I needed, I would still be walking around your giant store muttering “salt, salt, wine.”]

But it makes me think about all the things women and their families are missing in our current birth system.

I’ve eagerly asked women I meet to tell me their birth stories for over ten years now, and while I begin with high hopes for each new mom, by the time they’ve told me how they were induced, the shift change, that one nurse who was a bitch and how it all ended: “the baby was in distress, we had to get him out. I couldn’t do it anymore,” the buzz of new life is all but gone.

There is no pride, no glow, not even an it-was-hard-but-good, just a kind of trailing off as they listen to their own stories in the retelling.

I think they, like me, don’t really know whether it was all necessary – or safe. These women suspect what the numbers show: that maternal death in the US has risen along with intervention rates.

In the USA, figures from the Center for Disease Control [CDC] website show that maternal death and average rates of cesarean section have both doubled since 1985.

Maternal mortality figures get thrown around to show how the US is failing as a western nation, but I never took in how fast numbers are rising until I sat down to research this week.

Although changes in reporting may account for some of the increase in maternal deaths, the CDC also notes that: “the reasons for the overall increase in pregnancy-related mortality are unclear.”

This is pretty bad, America. More women are dying in pregnancy and childbirth, despite advances in technology, and we don’t know why.

Some clues can be found in the statistics – the leading cause of maternal death in the USA is disease – cardiovascular [15 per cent] and other diseases [15 per cent] and these figures are likely not linked to medical intervention.

11 per cent of deaths were from haemorrhage, which could be vaginally or during surgery.

But the next highest causes of maternal death is sepsis and infection at 12.7 per cent and thrombotic pulmonary embolism [blood clot], which accounts for 9.2 per cent of all deaths.

Surgery is a risk factor for both infection and blood clots, which means these women likely died after having a cesarean, and the two statistics together would mean that the majority of maternal deaths were post surgery.

Arguing that medical intervention continues to make birth safer for women past the World Health Organization’s recommended 10 per cent surgery rate starts to sound like my three-year-old daughter’s logic this morning:

“When you are sick, you should eat lots of chocolate bunnies. That will help.” [Good try, Callie!]

If we can agree that birth in the US is not where it needs to be, I hope we can agree as well that the fault is systemic, and doesn’t often rest with individuals – I  know medical staff are good people trying to get through another life-and-death shift on half a chocolate doughnut and a string cheese, and that protecting the hospital and themselves from litigation is a priority.

But the reason so many women have unsatisfactory births, and why maternal mortality is so high compared to other western nations runs deeper than just litigation.

Birthing women still don’t understand that because giving birth is something that happens uniquely to women, it’s also a unique pocket of sexism which is often unrecognized because it is ubiquitous and disguised as medical assistance.

The sexism that results in many women having an overarching feeling that they failed at giving birth is the same sexism that means women are victims of male violence and lower pay scales.

It is possible to take charge of our births, and yet most people I know do more research leading up to ankle surgery than they do before giving birth, choosing instead to “leave it in the hands of the experts.”

But a woman who is totally in charge of her birth is a woman who comes out the other side knowing how strong she is: a force to be reckoned with, ready to face the trials of parenthood.

A few days ago, I was standing around a hot fire talking with a lively woman who has had four home births. This woman is both tiny and powerful and she told me that in every one of her births, she thought she would die.

“Having that story – the story of feeling like you are close to death and then being so much stronger than you thought and coming out the other side, is the story of birth and it’s what bonds you to your baby. You already feel like you’ve died for your child, so you are prepared to do it again,” she told me.

The women who are rescued from the pain and work of labour unnecessarily – those 16 per cent who are excess to the WHO’s recommended section rate – miss out on knowing their own power.

I had two homebirths, my son in 2011 and my daughter in 2015 [and yes, I also thought I would die, at least at my daughter’s birth!] Both were born in Australia and both births were attended by the same qualified midwife, and each time we were hospital ready in case of an emergency transfer.

I will never forget noticing our midwife tucking her emergency equipment into a corner when she arrived for my son’s birth and covering it with a pretty piece of fabric, a move clearly designed with my physiological well being in mind. She knew she had to give every indication that I could do it, that everything would go well.

I don’t think it’s a coincidence that my births did go well.

I hope I live to see the day that the US gets its maternal mortality numbers in line with other western nation’s, and indeed, that all women have a birth story they can’t wait to tell.

A story that echoes all the great human stories of triumph in the face of adversity.

And a time paying customers in the business of birth receive customer service at least as good as they do in the supermarket.

So that when your provider asks you after the birth: did you find everything you needed? you can check it off:

If your last birth didn’t make the cut, check in the homebirth aisle next time.

Hi, I'm Elka and I have a double life - along with my husband and our son and daughter - split between rural Montana [his home] and rural NSW, Australia [my home]. I'll chronicle the ups and downs of moving between countries every 1-3 years, including cultural mishaps, parenting stuff and living on a tiny amount of cash. There will also be bits about friendship, gardening, marriage, politics and cooking. Thanks for following!