One of the things that blows my mind about this part of the world – north-west Montana – is how much food people forage, hunt and preserve.

Australia has wild food too, enough to sustain indigenous people for 60,000 years, but aside from the obvious – seafood and game meat [yes, kangaroo!] – bush food is more subtle than the dripping berry bushes we see here in the summer.

Or maybe bush food is just less in line with modern tastes, so fewer people utilize it.

We went mushroom picking yesterday, and this morning I woke up to the funky, sweet smell of morel mushrooms drying in the dehydrator.

Morels are wild mushrooms that appear mostly in low-intensity fire sites in the spring. I’d never done any serious mushroom picking until yesterday, and my only experience with morels was that some friends gave us some dried morels a few years ago.

Because we had them, I threw a handful in a soup or stew every now and again, not really believing that the grey, dry, unscented pieces of mushroom would contribute anything to the dish.

It took me quite a few stews to realize that the elusive funky flavour was the dried morels.

I don’t actually like the smell of drying morels. It’s pretty cloying. But morels are like fish sauce, or dried shrimp – when I smell them cooking, it’s not good – but the flavour in a finished dish is somehow different, and welcome.

Knowing that it’s not unusual for people to find fields of morels, and come back with gallons of mushrooms, we took plenty of bags, and set off into some dense burn area alongside a creek and beside a logging unit.

Our kids are 3 and 6 now and can hike a few miles, and we also had my mum with us, visiting from Australia.

Our area had some widespread wildfire last year, and the Forest Service opened up parts of the burn area to commercial mushroom pickers, so most of the burnt forest had already been canvassed – we could see clusters of hollow white morel stems under trees, cut with a knife.

No wonder the pickers had picked it over – morels are hard, if not impossible, to cultivate, so wild, foraged mushrooms are the bulk of the market, and fresh morels sell for anything between $50 to $150 a pound.

We traipsed on, over fallen, charred trees. The ground, burnt so hard, was down to clay, and after spring rainstorms, was very slippery [In Montana, we would say “slick”].

And then we found one small morel and another. The further from the road we got, the more we found, and the closer we looked, the more we stopped, the more we could spot them, the caps disguised as pinecones. 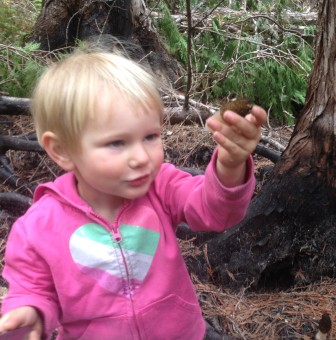 I was actually relieved we didn’t come into a glut of mushrooms, but rather, one or three here and there – this year, we are heading back to Australia in September, just before the major harvest/preserving/hunting season begins, and I’m being careful to whittle away at our food supplies, not build them up.

But it feels strange to go against the grain of the season – to harvest the glut, and put it away to provide a small comfort in February when nothing grows, and it seems like nothing ever will again.

I guess the morel of the story is, use what’s right in front of you.

I know that when we go back to Australia, Haak and I will apply for the permit to kill and eat a kangaroo on my parent’s property, and when mango season comes around, I’ll buy a flat and freeze the cheeks to use in smoothies later.

There is still so much I have to learn about living in my own country and climate, but what I’ve learnt in Montana about freezing, drying, fermenting and canning food has made me see a glut as more than overwhelming – to see it as an opportunity, not to be wasted.

And I’ll be on hand for morel support for any Aussies who want to work the glut more, although we’re spoilt in having a continuous season – fresh lemons and greens in mid-winter!

***I just could not stop myself on the morel puns***

Hi, I'm Elka and I have a double life - along with my husband and our son and daughter - split between rural Montana [his home] and rural NSW, Australia [my home]. I'll chronicle the ups and downs of moving between countries every 1-3 years, including cultural mishaps, parenting stuff and living on a tiny amount of cash. There will also be bits about friendship, gardening, marriage, politics and cooking. Thanks for following!